tagged with dotw
Winter Skal
I traveled to Madison, Wisconsin, last week, and finished all the work I had scheduled to do in two days, in one. That left me with a free day, and hence, a free night for drinking beer. I consulted Beerfly, which has an entire category devoted to Madison, and found that the best rated place in town to get a pint was a local brewery called the Great Dane. I stopped by, and had a mouth-watering Monte Cristo, and two mouth-watering pints of ESB and IPA, before moving on to a great place, also listed on Beerfly, and elaborated elsewhere, called the Come Back Inn.

The Come Back Inn, adjacent to a more-authentic-than-most German restaurant, boasts one of the best tap selections in Madison, and some of the friendliest, most helpful, most knowledgeable bartenders I have seen in such a bar. They obviously love the business of evangelizing American craft brewing, and their playground(one quarter of it, anyway) is pictured here. 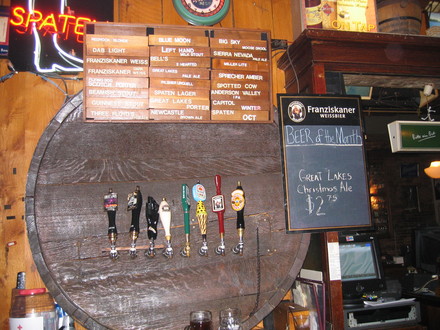 This is a closer look at the list of the beers that they currently had on tap. 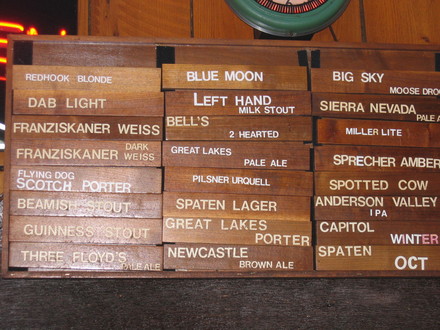 They had a Tuesday night special, dictating that all these beers, in an 18-oz German-style mug, would run the customer $2.75 a pour. I got right to it, and helped myself to glasses of Bell's Two-Hearted(previously mentioned on BDC), Great Lakes Edmund Fitzgerald Porter, Big Sky Moose Drool, and Anderson Valley IPA. Among these great American beers, however, I felt the need to review something local to Madison, and I chose Capital's cold-weather offering, Winter Skål. 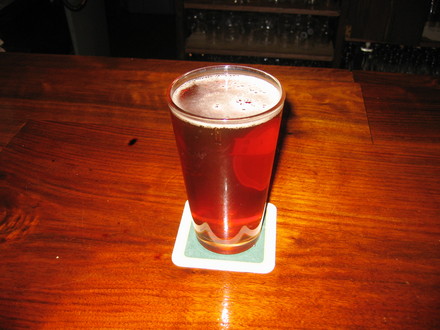 It pours a color that is surprisingly light for a winter beer, but with a deep copper-brown hue, it's still handily darker than most beers one will commonly see. I think it should also be said that winter, if it's considered an entire style, is my favorite beer style, and if it isn't a beer style, then it's my favorite time to get a beer.

This beer gets right down to business, biting the tongue with a sharp, burning fizziness as it enters the mouth. This biting subsides as the beer slides closer to home, and is evocative of honey and a light sweetness as it takes the plunge down the throat. It may have been my imagination, but the beer, as it journeys along the tongue, shooting off new, impressive flavors as it moves, like a wagon full of ignited fireworks, seems to produce a sensation of a sort of rolling. The beer- the flavor, that is, has its own character that feels like it's determined to make you keep enjoying the beer well after the last of it has been carefully swallowed. Also, it burps well.

I had about twelve breaks, as the friendly bartenders kept bringing me free samples of their favorite beers, but after about a half hour, I finished the glass, and euphoria ensued. 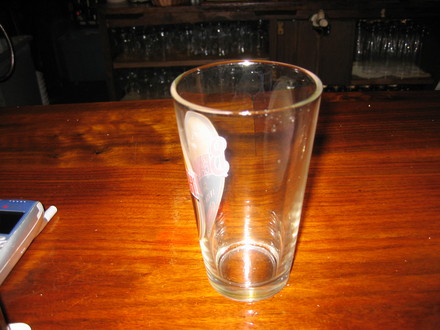 Ratings (Out of ten)

Flavor: 9 (Complex honey flavor that wears its alcohol content on its sleeve.)

Aroma: 9 (Smells exactly how it tastes.)

Smoothness: 8 (Goes down very smoothly, but makes you feel guilty for rushing.)

Chris chimed in with:
Very accurate review-- Winter Skal is an EXCELLENT beer!