tagged with dotw
Drop Top Amber
A full three weeks ago, I was in Portland, Oregon, and I now have a moment to write about the beer I drank there. It's been a hell of a couple of weeks.

Weinhardt makes some crappy yellow beer, and that's the only beer available in Portland with which I was not completely enamoured. I loved all the beers I had from Rogue, Full Sail, Wollaver's, MacTarnahan, Deschutes, McMenamin's, Steelhead, Tuck's, Tugboat, Flying Pig, Northern Lights, Pyramid, and Widmer Brothers, and wish I had the time and initiative to do a dotw on all of them, especially to make up for all this lost time. That'll have to come in another form, I suppose. Stay tuned.

In the meantime, I have a beer to review. Widmer Brothers makes a delicious beer, called Drop Top Amber, and it looks like this when it's poured: 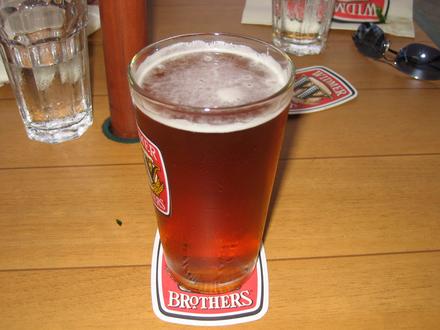 This picture, and all others on this page, were taken at the brewery's brewpub, one railyard away from the rocky banks of the Willamette River. That said, we tried every beer they had on tap, and I must say that I liked most of them. All in all, they are an excellent brewery, I found. 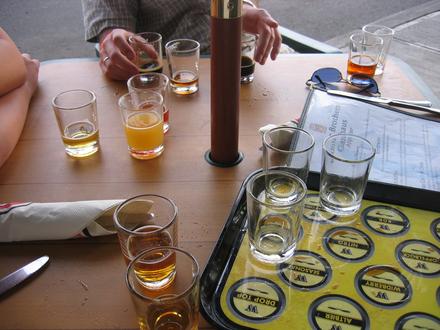 Anyway, I went to the brewery with Dave, Mary Kay, and Aaron, when we returned from a day trip to Mt. St. Helens, in Washington. We spent a long beerless day hiking and driving, and come dinner time, we were beset with a mighty thirst. Widmer delivered. 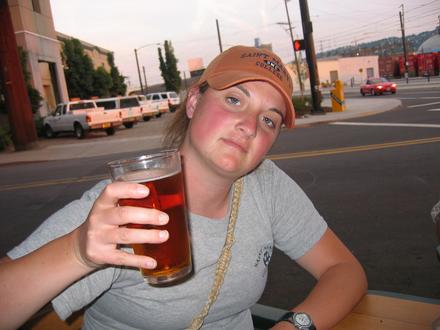 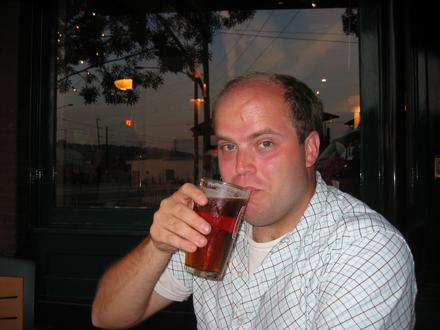 The beer, from the abundant opening pull to the final desperate airy gasp for the frothy dregs, is a pleasure to drink, but that may be the National Volcanic Monument-derived fatigue talking. I'll have to make another trip to Oregon, just to make sure. 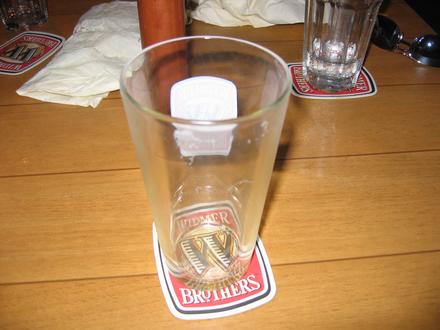 Relaxing with beer is one of the pleasures for which I wish I had more time, along with updating my website. 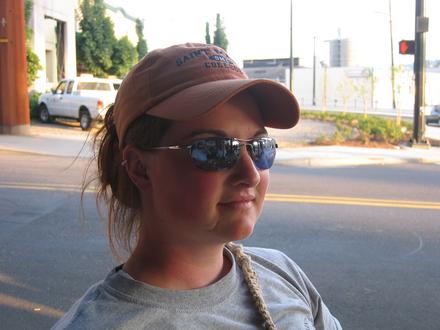 Flavor: 8 (Something new to discover in each glass. That's why I had more than one.)

Body: 6 (Neither stays with you nor gets out of the way. I honestly don't remember this being a big thing about the beer.)

Aroma: 6 (It smells like a tasty beer, and makes me salivate, but that's kind of par anyway.)

Smoothness: 9 (This stuff slides out the back exit of your mouth, leaving a slight trail of happiness behind it. Superb.)

Price: 8 (Portland's beer prices blew me away. This was $3 a draw, and that's pretty representative of Portland beer prices.)

Rachel replied:
For some reason, I really like the picture of... Mary Kay it must be... when she is holding the beer with the streets in the background. Oh yeah, and I don't think I told you this, but when I was in St. Louis a couple weeks ago, I bought Fat Tire and thought of you. My older friends liked it, my friends of my age thought it wasn't good. Long Live New Belgium!