tagged with dotw
Swan Lake IPA
I knew I had maybe one more beer in me before I extended myself too far, so I looked carefully over the list of Japanese craft brews and hoped I would be able to select something that would really knock my socks off. While I was extremely impressed with the bar itself, the Japanese beers had so far done nothing to impress me. They were good, and clearly brewed by capable hands, but I was hoping to taste something uniquely 'Japanese,' yet all the beers I had tried so far had been good, but unoriginal. Perhaps there was something to the idea that beers should be brewed tailored to the local yeast strains and not in emulation of other countries' specialties. America has its hoppy IPAs and West Coast ales, Belgium has its lambics and multi-layered barn brews, Germany has its pilsners and fundamental imperialist tendencies; what does Japan bring to the brewing table? I was beginning to fear that I wouldn't discover that flavor, if it existed at all.

I figured my best chance to discover something unique lay in the hands of the bartender, who I suspected was also the owner. He was quick to interpret my hand gestures and brought me a Swan Lake IPA (925 yen, brewed in Niigata Ken). I ordered the 'Pizza of the Week' as my complementary appetizer. 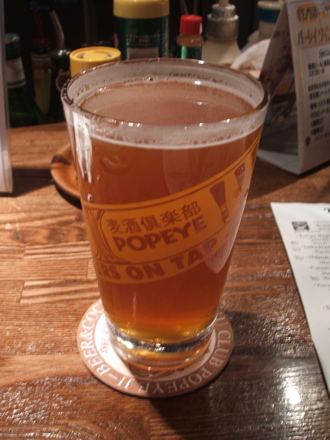 The Swan Lake was not the new flavor I was looking for (and would ultimately leave without discovering, if it existed at all), but it was clearly the best beer so far, with a sharp sweetness at the start blossoming to a hoppy, poppy finish. Clearly, my gamble on trusting the 'tender paid off, and I was rewarded with a rich, rounded beer that would probably stand up to most of the American IPAs that I was starting to enjoy. In fairness, I was already pretty inebriated, and I also think it is best to compare beers in alternating swigs. But even disregarding my hope to discover a beer that moved past 'good' into 'great,' I can stand behind my assessment that the Swan Lake is very solid.

Still, while a great beer is always a pleasure to discover, I have to say I was disappointed overall in the craft output of Japan's brewers (at least the four I tried). I guess a beer is a beer is a beer, to an extent, especially if you stick to the four core ingredients, but I still hoped to discover a risk-taking beer that hadn't been - or could not have been - duplicated anywhere else. Maybe that's unfair%97I don't exactly have a lot of experience trying beers brewed outside of the 'core beer' countries.

As a bar, though, Popeye's is not to be missed if you are in Tokyo. The selection of beers is outstanding, an order of magnitude beyond what I've seen anywhere else in the city, and you owe it yourself to try the Japanese craft brews for yourself. I don't put too much stock into others' opinions, to an extent, as my own tastes change more often than I would expect. There may be qualities that I'm not appreciating. And besides, a new beer that is only so-so is always worth drinking. 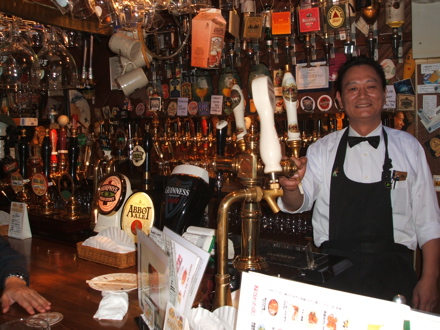 The bar is impressive, although the bamboo-backed stools leave little room for my big, beautiful ass. And after I paid, the bartender followed up with a sample of a delicious barley wine, Japan-brewed That was a treat%97maybe I should have started with that first?

Flavor: 8 (Sweet, almost syrupy start (in a good way), with a POW

block of hops at the finish)

Body: 6 (Solid, but not its strong suit. Still no head)

Aroma: 8 (Bubbling mixes of hops, with the occasional flower coming through)

Smoothness: 7 (Easy to glug, with no sharp edges)