tagged with dotw
Frambozen
For the inaugural run of the Draught of the Week, I have decided to go and taste the delicious winter ale that New Belgium Brewery, in Fort Collins, CO makes. Before going to Barley's in Shawnee, KS, I had only seen this beer on tap at one other place: Charlie Hooper's Tavern in Kansas City's Brookside neighborhood. Brian and I plugged out to Barley's, and enjoyed a delicious dinner before trying the first draught in unison. First, we tried a couple of beers independently, to get a feeling for beer-tasting.

When we sat down, I noticed that their beer list has this unfortunate notice on it: 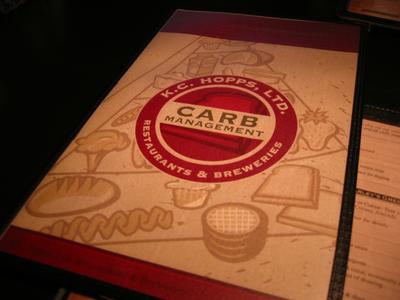 Not one to despair, I ordered one of their 99 beers on draught, and washed it down with a KC Strip Steak. At surprisingly regular intervals, our waiter checked back with us, and saw that we seemed overly interested in all the beers they had on tap. At this, he offered us a tour of the keg cooler, a two-story, custom-made room for the purveying and cooling of their 99 varieties of beer. 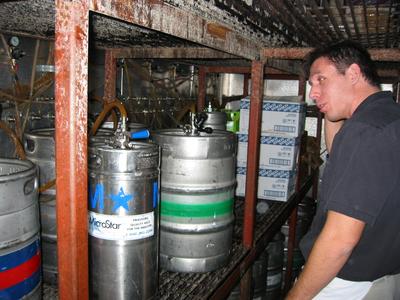 This is the crane that they use to lift full kegs to the second level. 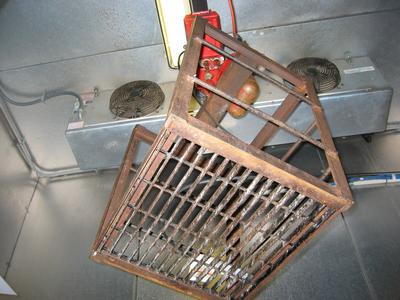 Anyway, on with the beer! Frambozen is a raspberry brown ale, with a very strong, but addictive flavor. The raspberry flavor hits you hard at first sip, along with the slightly higher-than-average alcohol content(6.5%). The first time I ever tried this(in a bottle), I didn't like it, but as I drank more of it, it grew on me to the point that I loved it. It's very dark, but still very sweet, rich, and sneaky. Here it is before doing its damage. 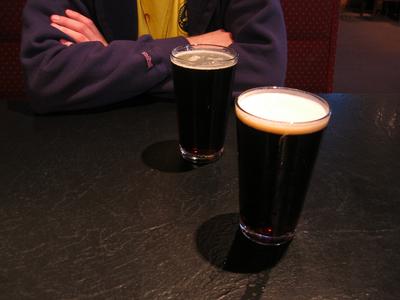 It's sneaky, because you don't really notice, as you drink it, that it's about twice as strong as a normal American beer. After confidently drinking three of them, talking about politics and rocket design, you get up to pee, and the room seems to have been moved onto the deck of a boat at sea. This is not a beer to follow with an important drive, speech, or sudden movement.

When it's over, it prettily sparkles at you from the empty glass(on special tonight for $2.50), giving you a feeling of guilt and ungentlemanliness at not having another one at the ready. But, we had to get home, and the beer was good enough in memory.

Flavor: 8 (Has replay value. Taunts you.)

Body: 7 (The flavor has a 15-second party in your mouth, and politely cleans up and goes away)

Aroma: 9 (Hits you like a ton of bricks, with machine guns)

Smoothness: 6 (because of its initial roughness)

bahua was sure you'd want to know:
So, when I was screwing with some things earlier, I broke the comments again, and accidentally blew away the comments that had already been entered. Optimistically viewing this situation as a "clean slate," I rewrote the comments system, and have added editing and deleting capabilities to the system. The deleting works, and the editing is almost there. Once I put the finishing touches on it, I will add this functionality to the comments on the main page.