tagged with dotw
Nut Brown
As is evident elsewhere, Josh and I bottled this weekend. From the dregs of the "Ale Pail," we siphoned two glasses, once the bottling was complete, and decided to have the first-ever Draught of the week without any carbon dioxide or nitrogen propulsion, or any carbonation, for that matter.

Here I operate the "tap." 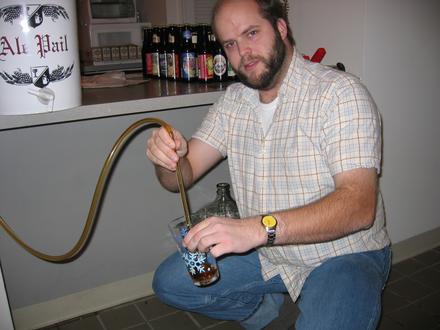 The beer pours a deep copper color, and looks to be about three days stale. 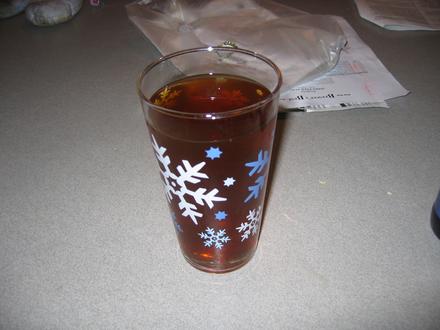 Our first words after tasting it were, "to the next batch!" However, the more we had, the more we liked it. In addition, we guessed that this beer is very strong. the original gravity reading was 1.082, suggesting a potential alcohol content of about 12%. I don't think it was that strong, but the effects it seemed to have as soon as we each swalled a bit suggested that it was a very strong glass of beer. So, we've got that going for us. 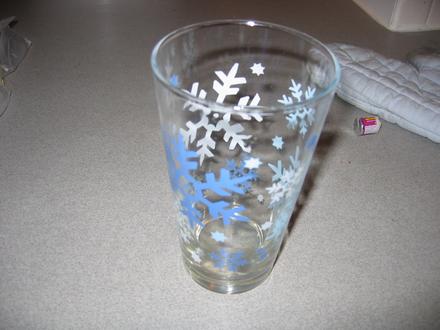 On top of that, the beer was neither carbonated nor chilled, which made it a bit odd. It wasn't bad, but it wasn't great either. But again, I must mention the draw it had, to encourage us to keep drinking it.

Body: 7 (Very thick. You know you're drinking beer you didn't buy at the store. Take that as you will.)

Aroma: 8 (This is the main redeeming factor, in my opinion. The hoppy aroma is pervasive, and promises good things to come. It gives me hope that the bottle conditioning will have a good effect.)

Smoothness: 7 (Actually goes down pretty smoothly. The more you drink, the more you want.)

Price: 2 (At about $230 to get everything in place, this is probably the most I've ever spent on beer. But then again, this whole brewing thing isn't about saving money.)

Joel interrupted with:
I can attest that the beer you were drinking at that stage is

nowhere near what you'll end up with. Time, boys! Time!