tagged with dotw
Maredsous 8
This beer, which I can only find websites about in French, comes from the tiny island of Belgium, and is produced by magical gnomes with the expressed purpose of making the world a better place. We discovered it yesterday, when my underage sister and I stopped by Charlie Hooper's for some of the best poured beer in Kansas City, from any of their over-35 taps. I liked it so much, I convinced Brian to return to Hooper's with me tonight, and try this startlingly tasty beer. 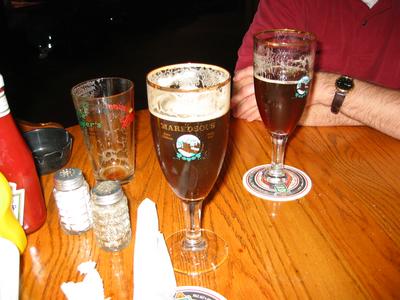 It comes in a screwy glass, in an attempt by the bar to make you feel special about getting less beer than normal. When poured, it's brown and slightly transparent. These things are difficult to notice, as when it arrives, you can't think of much besides how an empty glass of this stuff must look.

I had already had a glass the previous day, so Brian took the first sip. After seeing his reactions to the magical gnomes' work, I took a sip or three, and spoke my piece.

It's a Belgian Abbey Ale, produced by magical gnomes(otherwise known as Benedictine Monks), and sports an alcohol content of about 9%. It would sneak up on you, if you weren't already rapturously attacking it. My only compaint is that it's over too quickly. 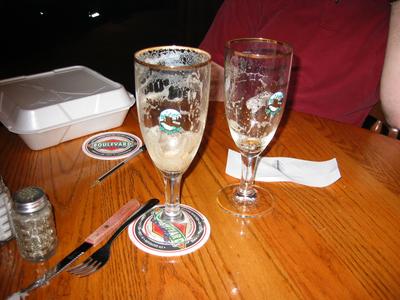 Flavor: 9 (Just reminiscent enough of Chimay that you try to pronounce the screwy way that Belgians say Cheers.)

Body: 8 (It reminds me of much more expensive beers, in that it permeates your mouth and throat, and makes you wish you didn't have to go.)

Aroma: 8 (As it teases your nostrils, you feel like there's something you should be remembering right now, like going to the dentist or paying the bills or something. Then, .0045 seconds later, you forget utterly anything besides the beer in front of you.)

Smoothness: 9 (It slides down your throat like a greased scotsman... from Belgium.)

Price: 9 (At four dollars a pour, I definitely cannot complain, for a beer of this magnitude.)

Rogue_Planet interjected:
Had one last night and didn't realize it was

a 10-percenter. Wow, an unexpected kick since

it went down smooth...

dave_o had this to say:
Went to Charlie Hoopers recently and they are no longer serving Maredsous! Know of any other place to get this or any other Belgian beer on tap in KC?

bahua interjected:
I saw that last week. It's a real shame. No, I don't know anywhere else where you can get any Belgian beer at all on tap, in KC. I'm guessing it just wasn't selling well enough. Ahead of their time, I'd say.

At four places in Dallas, we can enbibe Maredsous

on draft...however, your site is named "Maredsous 10", but the beer pictured would seem to be draft

If I am wrong, please email me, I am learning.

I too, saw Chimay as the only Belgium ale...boy was I wrong...this is a GREAT beer.

Is there any other way to order it by the case, I pay a fortune for each bottle, which I order from "Central Market" (heb) in Dallas.

bahua had this to say:
Heh. I think you're right. I think it is Maredsous 8. Well shut my mouth. I will rename the page.

The places to purchase Maredsous in Dallas are:

bahua cut in with:
I think I went to Trinity when I was in Dallas, a couple summers ago. I recall it being an island of good beer selection in a sea of Budweiser. I appreciate you leaving contact information, but I'm going to remove it from the page, and save it in my addressbook. I'm sure you hate getting spam, and leaving your full email address on a public webpage is a surefire way to get spammed.

KE responded:
I tried the Maredsous 8 this weekend and that's why I'm here - looking for more. They serve it on tap at McCray's in Midtown Atlanta. This is now my favorite. I'd love to find it in bottles.

bahua interrupted with:
That's great. I need to find a place in KC that has it, or maybe I'll just have to try and make it myself. I've been doing that quite a bit lately.

bahua blurted:
It's very close, but not quite there. However, for four bucks a glass(three during happy hour), I am definitely not complaining. Now, it's time for me to write "Some Retard" out of these comments.

Rachel interjected:
I've told everyone (that would care) about this beer. Jeesh.

jean-jacques was sure you'd want to know:
Hi,

We live about 30 km away from Maredsous and so take the bike for a quick ride there every often. They also produce an excellent blonde rating 6%B0 and a stronger brown ale rating 8%B0 -both can from bottles or draft. Maredsous cheese is great too !

John spoiled the calm with:
I'm drinking one now, in Warsaw Poland (they come in 750ml bottles at about $5 each), and laughing my ass off about the little gnomes... its made by the company that makes Duvel- they just license the recipe from trapist monks.

Still, good stuff. Terrific you can get it on tap in KC!

KB82 replied:
I first tried maredsous in July at a pub in Frisco, TX. It is a great beer! There is a draft house in Waco, TX that also serves it on tap. I wish I could find it in bottles I would love to have this beer around all the time.

First, let me state this: Belgium is not an island, it is surrounded by The Netherlands, Luxembourg and France.

Second, Maredsous is an abbey beer that is brewed at Duvel Moortgat following the old recipe.

bahua said:
I know that Belgium is not an island. What I said was meant to be a joke. Such things don't come across as well over the internet, it seems. You will also notice that I said that magical gnomes are a piece of the process, as well.

Anyway, I had this beer again last week. Just delicious.