tagged with dotw
Yona Yona Pale Ale
While the bartender poured my next beer, the Yona Yona Pale Ale (I had asked for the Yona Yona Porter, but alas), I sampled the slimy, iridescent bits in the bowl that had been placed in front of me when I arrived. Despite looking like an internal organ, the oil and mystery sauce-soaked vegetable was pretty damn tasty. It was obviously a stem of some sort, but I couldn't place it from looks or taste. I ordered the Yakisoba-style Spaghetti, hoping it was the cold soba buckwheat noodles I had been eating a lot of the last week. 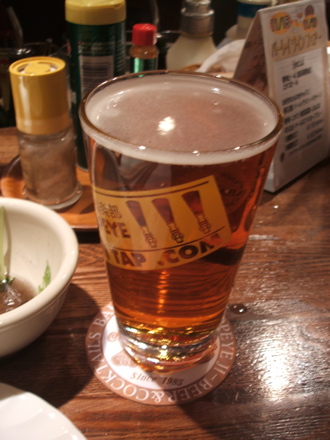 The Yona Yona Ale is advertised as coming from Nagano Ken (I really should look these names up at some point when I have internet), and is priced at 924 yen for a pint (around 1000 yen is typical for most of the Japanese beers at Popeye, while oddly the imported beers tend to be cheaper per pull). The Yona Yona has a honey color, with no head to speak of. It's flavor is weak at first, with a moderate hoppy finish. Since I tend to justify pale ales' existence only as a hops delivery mechanism, I would have preferred a stronger hoppy punch (although it would only be fair to note that I have been on an aberrant hops kick of late, having swung from an almost anti-hops viewpoint to a 'can't get enough hops' perspective over just the last 3 months or so). There are some IPAs on the menu that I might try%97it would be interesting to try what has become almost an American beer as interpreted by the Japanese.

The soba noodles arrived hot, in a slightly more ample portion than the chicken did. They were great, though, although I worried that the vinegary flavor might overwhelm the half of pale ale that I had left to drink. Fortunately, the watery front wave of the Yona Yona cleared the palate of soba flavor just in time to pass on the medium hops finish. I bet soba noodles and a real hoppy beer would go great together.

I have to say, Japanese food is pretty great. While fishy flavors are much more common than in American food - fish flavor is a seasoning in Japan, much like we tend to use pork or... well, pork, I guess - not everything is fish or rice. In fact, I found of the food to be very rich, filling the mouth with a flavor sphere (unmammi is it?) when you least expect it. Imagine eating some noodles but getting a mouthfeel like duck, for instance. It can be striking, but very attractive.

I noticed while looking over the menu in anticipation of my next drink that the Yona Yona Pale Ale I was drinking was also available hand pumped. I would imagine that was what I was drinking, in fact, which would partially explain the 'flat' flavor. Hand-pumped beer doesn't have the same levels of carbonation draft beer does. Maybe I'm a rank amateur, but I don't tend to enjoy cask beers as much as draft beers. I like me some bubbles.

Smoothness: 6 (Of course, part of that smoothness was lack of carbonation)