tagged with dotw
Hazed and Infused
Last week, I got a call from Bryan, with whom I used to work at Sprint. After exchanging pleasantries, he whipped out the meat and potatoes, inviting me to go and get a beer with him the following week. I happily accepted, and we agreed on Barley's in Overland Park, on Wednesday night.

The night came, and I made my way down to Overland Park in rush hour traffic, and I must say that traffic there is worse than I remember it. After miles of nothing, I arrived at the corner of 119th and Quivira, the alleged location of Overland Park's Barley's. Geoff told me earlier in the day that it was at that corner, on the southeast block. I came south on Quivira, as you can see in the diagram below. 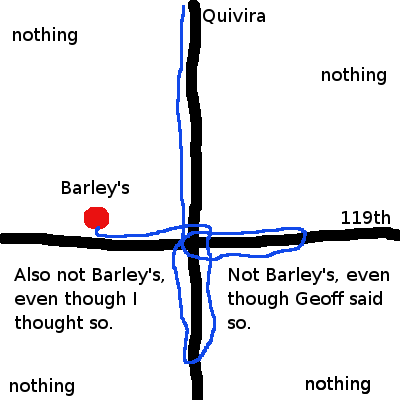 As you can probably also see, from the nature of my route, denoted by the blue line, both Geoff's advice and my intuition failed me. Barley's was not on the southeast corner, nor was it on the southwest corner, where I spotted a building that looks like what I'd think a suburban brewhaus would look like. Anyway, I eventually found it, and went inside.

I met up with Alex, Louis, and Bryan inside, and bullshat with them for about an hour before getting a table for dinner. Alex took his leave, as he had business to attend to, and left us to attend to ours. We ordered dinner, and decided that the Draught of the Week needed to be something completely foreign to me, so we went through the list of 99 taps, and came to one I didn't know. Rockies Brewing Company's take on the American Style of IPA, Hazed and Infused. 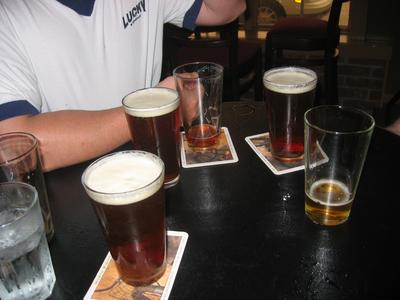 I think this is one of the most aptly-named beers in existence. It hits your tongue with a burning buzzing fizz, thoughts of which its name fully evokes. While it definitely fits the description of an IPA(being hoppy, robust, slightly bitter, high in alcohol), they call it an APA(American Pale Ale) because of the purported divergence from the original IPA recipe. This beer was absolutely delicious, and even has hints of a citrus flavor. It's just an amazing beer, and I highly recommend trying it.

Bryan and Louis agreed that it was tasty, and yes, that was the real color outside. 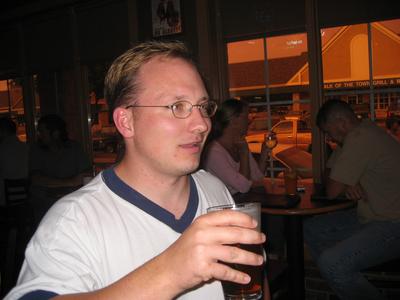 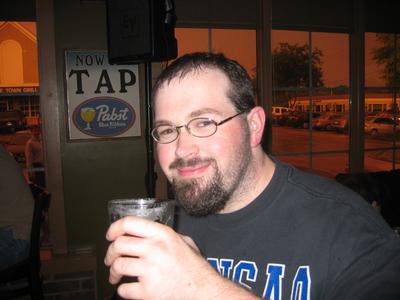 Flavor: 8 (A truly unique flavor, it seems to have slight citrus overtones, which I think is what adds to its bite.)

Body: 7 (With a very full body, this was an IPA that was ready to lay siege to your senses, and plow its way in.)

Aroma: 7 (The odor immediately attacked my nostrils, forcing me to drink.)

Smoothness: 8 (Even though the hoppiness gave it a slight burning feeling, it still went down very smoothly.)

Louie replied:
Despite the nuclear blast going on outside, that was an enjoyable dotw! Too bad we coudlnt get the Geehoff Flossare on board.

Gheeov chimed in with:
I will accompany ProdCon on it's next teambuilding outing. For sure.

bapple chimed in with:
that was a wonderful description of a beer that I only faintly remember... reading it has left me parched hmmm... perhaps a beer.

Louie responded:
I think it would add to the intangible if we gain super powers from the nuclear explosion, or detract if we got some sort of radiation poisoning.