tagged with dotw
Maibock
Just before the wedding this past weekend, I drove up to Minneapolis to pick up Amanda, and decided that it'd be easier to show up on Thursday night, and leave with her after she got off work on Friday afternoon. With this in mind, she planned an evening out(referenced here), modeled after the desires of my own heart. We went to William's in Uptown Minneapolis, where I saw the hallowed Two-Hearted Ale on tap, and drank several. But, since I was already quite familiar with it, and on the road, I decided to go a bit more local, and decided on a local beer: Summit Maibock. 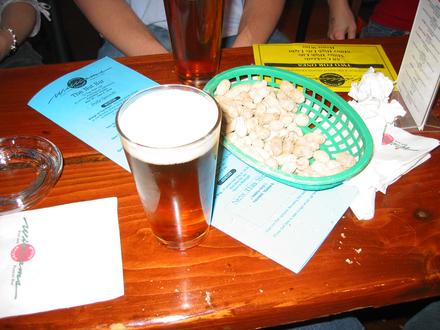 It pours almost the same color as the table where we sat, which is very confusing at times. Notice Vince's beer across from mine is full of the same beer. He was the only one in the mood for a DOTW. It was very tasty, with a slightly sweet flavor that still delivered an insubordinate kick when I felt like I had defeated it. 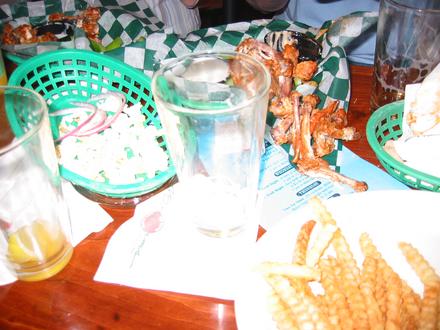 Then, after I defeated the beer, my camera defeated it with some helacious flash-glare. 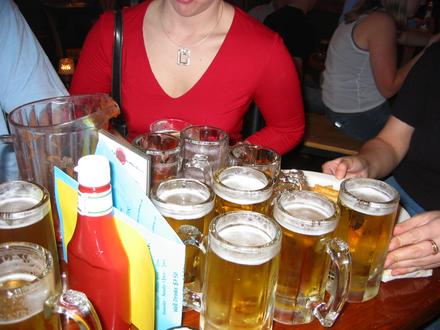 After the DOTW was over, we discovered the two-for-one high life special. I went through two glasses of the "Champagne of Beers," before I returned to forking out the money for real beer. Vince and Amanda both ordered full-sized pitchers of hot wings. Gross. Amanda later told me that the very idea of McDonald's for dinner makes her feel ill. I find that hard to believe, looking at the picture below. 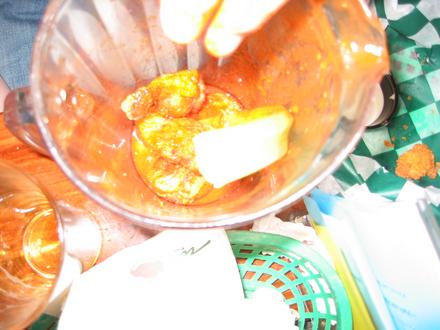 Flavor: 8 (This really isn't a fair rating, as I generally love Maibocks, but you have no say in the matter, so I feel justified in my tyrannical decision.)

Body: 7 (Like any good Maibock, it's very robust, yet just as sweet as the onset of May.)

Aroma: 8 (Maibocks smell good, and this is no exception.)

Smoothness: 7 (Its flavor is what makes it go down so smoothly. Its higher than average alcohol content makes it dangerous for that.)

Price: 3 (At 5.50 a frigging glass, the least they could do is get it to my table within a reasonable span. In conclusion, it's expensive, and Brian, Amanda's friend informed me that the prices for the beers on tap are never reduced for any reason.)

bahua interjected:
Hey! Now you can see the whole entry!