tagged with dotw
Boston Lager
I know it's a bit early for another DOTW, but seeing as how I left everyone hanging for about two weeks, I feel as though I have some making up to do. Plus, Brian got back from Pennsylvania today, and it'd been a while since we had a beer together. So, we went and had three.

We went around the corner to Tanner's on Broadway, and saw that their tap selection is really dwindling. They have two identical sets of 16 taps. On each of their two rails of taps, they have two of each of the following: Budweiser, Bud Light, Miller Light, and Coors Light. This works out to half of their 32 taps being occupied by what I call "grey beer." Very disappointing, in my opinion. We each tried some local beers we had never had before, from Pony Express and Flying Monkey, which were both very tasty. Brian was ready for the Sam Adams before I was. 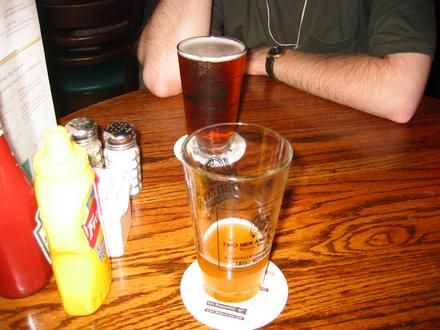 Then, I got the lead out, and but the beer in, and received my Adams. Here's what it looked like. 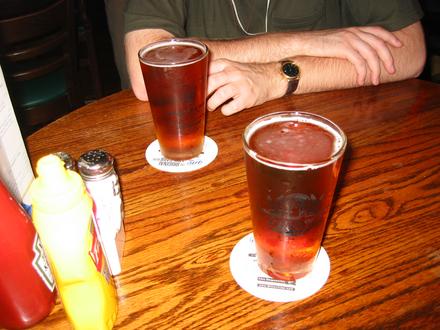 From start to finish, it's a wonderful beer, with something new to notice, every time you drink it. For such a common beer, it really is a gem, and it's always gone quickly. 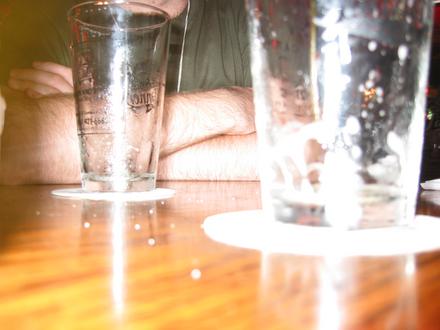 Flavor: 9 (It surprises me every time I taste it. It's like it does a backflip in my mouth. I suppose it kind of does.)

Body: 8 (This is a beer that keeps your attention, with a big, full-bodied character. It will not be ignored.)

Aroma: 6 (It doesn't have much of an aroma, but it still makes me salivate when I smell it.)

Smoothness: 6 (It's not very smooth, but it distracts you from that with its flavor.)

Brian interrupted with:
Ironic that this beer was chosen so that lots of folks could participate in the discussion, yet no one has discussed.

Sam Adams is, in my opinion, a very underrated beer. Because people hear about it as often as they hear about gray beers, they discount. Not only do they have good seasonals (like the Summer Ale presently inhabiting my fridge, but not for long!), but their all-years are also excellent. Though, I will take exception with Cherry Wheat in deference to Mr. Olsson and in spite of Ms. Kvortek.

In short, don't be fooled by all the marketing! Sam Adams is actually good!

Anonymous_in_DE responded:
You like the Summer Ale? Ugh. And don't knock the cherry wheat until you've tried it!

bahua wants you to know:
I've tried the Cherry Wheat. Its evil is palpable.