tagged with dotw
Dry Stout
For your beer this week, I took advantage of a Friday afternoon at home, and ambled on over to Tanner's. I wasn't really in the mood for anything complicated, and luckily, Tanner's doesn't have anything of the sort. I always enjoy going into a bar when it isn't busy. You get to see all the people that decent people scoff at, while they're still sober.

Just before leaving, I had been carrying on in the kcgeek IRC channel in a rather, "zany," manner, such as to bring the false impression upon various people that I had already been drinking. I informed the folks on the channel that I was heading to Tanner's for a beer, and was met with the following reactions.

Not one to disappoint, I walked straight over to Tanner's, and had the friendly bar steward pour me a glass of Boulevard Dry Stout, which has always been one of my favorites, here in town, and a glass of Flying Monkey for demian.

The big buzz, these days, is an unhealthy diet style, involving the deprivation of your body of carbohydrates, in order to quickly and dangerously have your body eat through your fat instead of carbohydrates. For those of you out there with this ridiculous, self-destructive hangup, stout is the beer for you. Lower in carbohydrates, and in calories, than any other real beer. (note: anything with "lite," "light," or "ultra," in its name is not a real beer.) 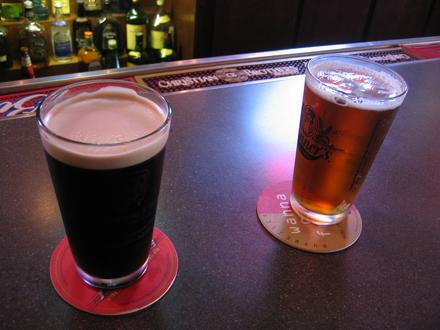 The beer pours as black as night, not even translucent, while demian's beer sat patiently, waiting for me to finish. 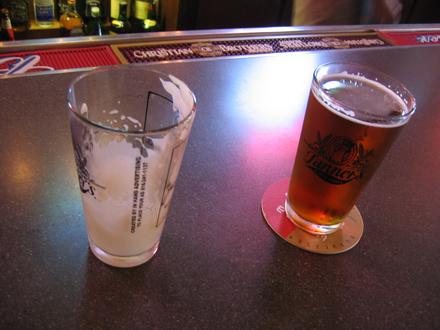 And finish I did! I celebrated by paying and tipping. 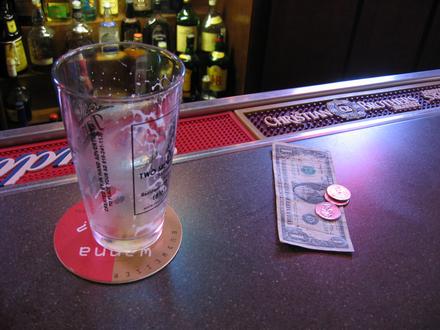 Flavor: 7 (It definitely tastes like a stout, but admittedly, Tanner's supply was not the freshest, and you could tell in the slight unpleasant, out of place bitter tinge.)

Body: 9 (Thick and creamy, this stuff gets noticed, until you've had four or so.)

Aroma: 6 (My nose is stuffed up, so I like to imagine that it smells like pepperoni pizza. I know from previous experience, however, that it does not.)

Smoothness: 8 (This is what separates this stuff from Guinness. It goes down very easily, so you can drink this all night without even knowing what you're getting yourself into.)