tagged with dotw
Michelob Ultra
I have decided that this column has been overly biased against beers that most people know. I haven't reviewed beers that are regarded by many as the "beers of the people." So, for all you macrobrew fans, this week is for you.

I met up with Josh and Sadie at Josie Ann's, for happy hour, and after a spirited glass of PBR, I informed Robin the friendly bartender that I was in the market for some shitty beer. Four minutes later, I had a very light yellow glass of Michelob Ultra grinning up at me with a low-carbed grin. Josh joined me for moral support. Sadie was of no such mind. 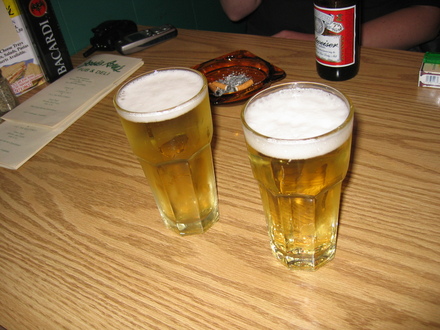 The beer, when I first tasted it, surprised me. I expected it to be bad, but man, this stuff makes me want to go and turn myself in at the police station. It was so bad that I made a nasty face without even noticing it. Two sips into it, I decided this beer didn't need to be relished and examined. It had to end. You can't polish a turd, they say. So, I chugged it down in three gulps, suffixed by one of the worst pouty baby bitter beer faces I have ever contorted my face to.

And here's the thing: I wasn't happy it was over. I was pissed. I was pissed that this stuff is as abundant as it is, and that people still order it at bars. It is anything but pleasurable to drink. I would classify the experience as one of mild torture. Yet, people drink this swill to reward themselves for a good workout. If this is how I'm supposed to reward myself, then I must really hate me. Here, you can see how unforgivably yellow and fizzy this beer is, compared to such a premium beer as Pabst Blue Ribbon. 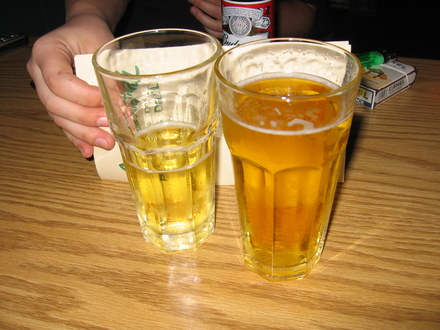 Desperate to get the terrible taste out of our mouths, we scurried over to Jilly's and got some real beer. 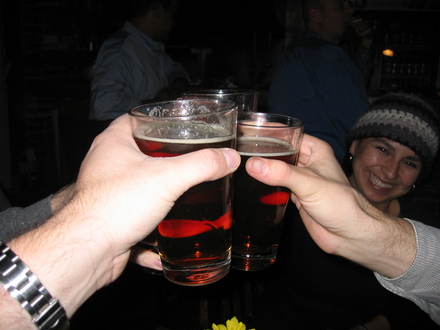 Flavor: 2 (So bad that I wish I could undrink it, and unlive the moment.)

Body: 1 (It actually has an aftertaste that's somehow worse than the flavor. One thought enters the mind when this beer enters the mouth: get it the hell out of your mouth!)

Aroma: 2 (Are you kidding? It smells like, I'm not kidding, excrement.)

Smoothness: 1 (I would drink this beer again, but only for monetary gain.)

Price: 0 (I can't believe they wanted money for me to help them unload this sin against tastebuds. Even more amazing to me is that this is a successful beer. I guess it just goes to show that you can convince people to put anything in their mouths, as long as you have millions of dollars in your ad campaign.)

Bud spoiled the calm with:
Mich Ultra's not a bad beer. Quit being a beer snob and shut the fuck up!

bahua thinks:
Yeah, I guess Mich Ultra isn't that bad. It's only bad when you compare it to other things.

Ben spoiled the calm with:
Most bars will just give you the tonic water FOR FREE if you ask for it.

bahua was sure you'd want to know:
This beer needs to be stopped.

alexjandro_mi_amore replied:
John's review is incorrect. This is not a bad beer. It is like drinking the last bit of miller lite that some one had ice in and decided that they couldn't drink anymore because it was so watered down. Taste???? This beer has no Taste. John, I have lost a lot of respect for you for saying this beer had ANY sort of taste.