tagged with dotw
Fat Tire
Yeah, I know it's been a long time. I haven't even been particularly busy, at least, not compared to most people. I can only apologize, and hope that you can find it in your heart to forget about it. To help, here's a distracting picture. 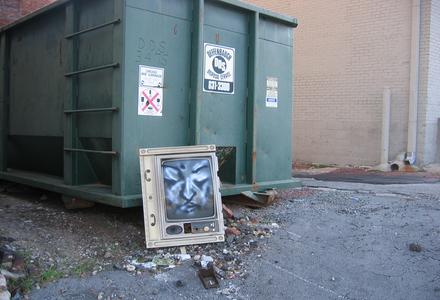 Anyway, I decided it's been long enough since I started this little web experiment, to officially review one of my favorite beers, and one of the most common regional beers in the Western United States. This beer is produced by New Belgium, in Fort Collins, CO, and is called Fat Tire. It's an amber beer, and surprisingly, it is, by far, their most popular beer.

I have seen it on tap in Colorado, Kansas, Idaho, California, Oregon, Arizona, Nevada, Wyoming, Nebraska, and my home state of Missouri, making it one of the most well-distributed beers that isn't produced within the circles of the alliance of evil: Anheuser-Busch, Miller, and Coors.

Nathan and I met up with Josh and Josh at Tanner's for Booga night, and actually received a free round of these beers, because of some alleged clerical error at the bar, but Josh was happy to receive them. 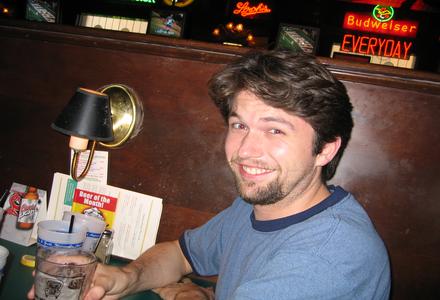 The beer pours a deep orange. Pictures like this are rare. 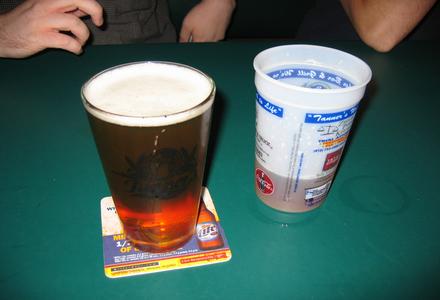 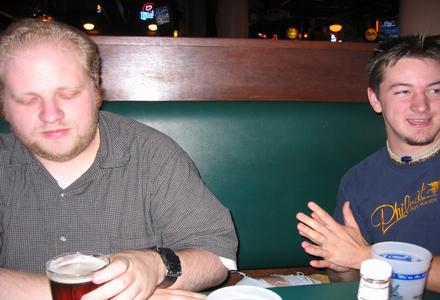 I was having such a nice time, I forgot to get an "empty" picture.

Flavor: 8 (This is a consistently tasty beer, and always surprises me when I'm not paying attention.)

Aroma: 6 (Sigh. It just smells like beer to me. I guess its common aroma belies its flavor.)

Rachel responded:
I saw someone wearing a fat tire shirt the other day and stopped them, complimenting them on their good taste...

yes, at age 19, a sophomore in college, you have made me a beer snob. thank you.

bahua commented:
Please don't double your posts. One click is all you need.

Todd blurted:
Fat Tire is also available on tap as far east as Chicago. The fine folks at Kelly's Pub (catchy name) have included it on their rather impressive draught list. When I jokingly asked the bartender if kegs of such a fine-tasting non-midwestern beer have to be smuggled in under cover of darkness from the back of a Volkswagen van, he just laughed and said no. Turns out it's a Jeep Cherokee.

Rachel replied:
Wow. Hey. Really? Kelly's? I can get in there!!

check. weekend the next.

Joel took the time to say:
I had Fat Tire on tap in Cooperstown, NY. That doesn't count,

though, because they brought it special.