tagged with dotw
Echigo Stout
An Amy Grant song started playing over the sound system. I noticed that many of the beers displayed on tap weren't on the menu, including Murphy's Irish Stout, Conquest Master Brew, Old Engine Oil, and BelleVue Kriek. If all the taps were actually live, they had a very impressive selection, rivaling the tapworks of any bar I've ever been to. I also noticed a sign for 'Shizenbakushu Pyramid Old Lambic' from Hakuseki Kan Brewing%97I was determined to try a Japanese 'lambic' if they actually had it, but after some hand gesture communication I determined they didn't.

Instead I ordered a Echigo Stout, from the eponymous brewery from Niigata Ken, for 935 yen for a pint. I had been noticing the staff being extra polite, probably because I had my Powerbook out and was clearly taking notes (and I have to admit, giving a little bit extra class{flourish} for each sip). It might have made me a ripe bastard, but it's not often one can be in a situation to suggest they are an important journalist documenting their experience in a bar without actually having to lie about it. I finished my cigarette before starting in on the stout. 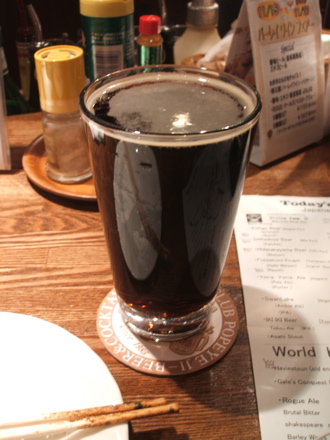 The Echigo Stout was fairly light in color for a stout with little-to-no head. I had a little swig to cleanse the cigarette taste and ate the potatoes I had ordered along with it, which were served in the typical Japanese quarter-wedge style (along with mayonnaise, butter, and what tasted like cocktail sauce).

The stout had a strong coffee line, although none of the richness typical of the sweet, milk stouts that I prefer. Many of the beers I had been sampling in Japan shared that same fear of richness - single note beers seemed to be par for the course. Even when that single note was pleasant - and the coffee note of the Echigo certainly was - it still left the overall impression to be one of immaturity, not simplicity. The bouquet of the Echigo was much the same - appealing, but not intriguing.

I realized with a start that I had consumed two and a half beers in the space of about 45 minutes, which put the likelihood of my successful return to my hotel in Shibuya in some doubt, especially when I had such trouble getting to Popeye sober. The Japanese are a friendly sort (with a few notable exceptions), so I decided to just go for it. I had spent almost every night lit up like a Christmas tree since I landed, often from beers that I only drank because they were there. 'Might as well make a night of it,' I figured, even though it was just then seven in the evening.

Overall, the Echigo Stout is pleasant, but suffers from my prejudicial preferences in stouts. It is clearly a dark-roasted barley drink, but I like cream stouts, and it is too clear of a flavor to really suit me - I like my stouts muddled and rich. Still, as I slowly worked down my glass, I was anything but dissatisfied.

Flavor: 7 (Tasty but not complex. Coffee tones, not chocolate)

Aroma: 6 (What smells it had were great, but they weren't strong

enough to set the nose and tongue ready)

Smoothness: 5 (Very drinkable, but nothing remarkable)